How Fostering Dogs Changed My Life 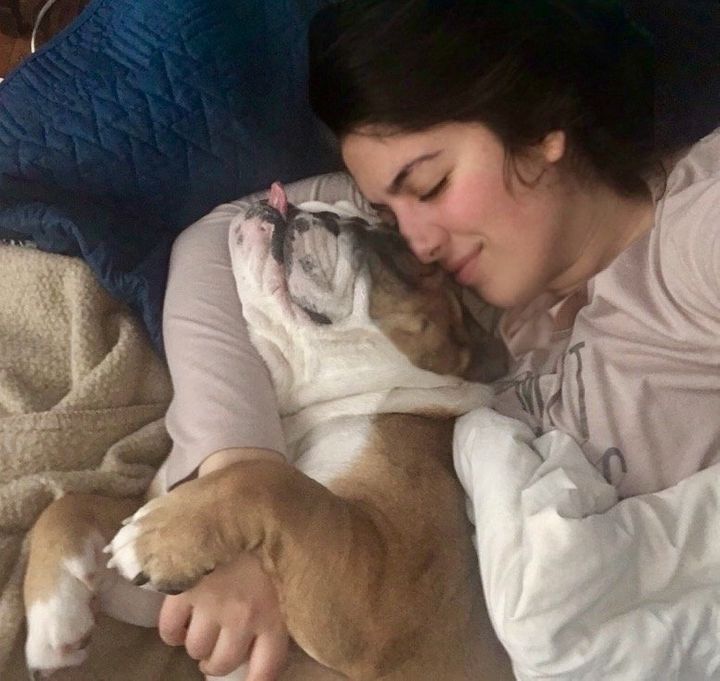 I was leaving for work when I found Blanche, the 5-year-old, 43-pound English bulldog I was fostering, peeing on my bed.

I want to be the kind of woman who can coolly handle pee on my bed. As it happened, though, I broke down in tears instead. Blanche showed me no mercy, continuing to pee on my antique bed and my brand-new mattress covered in white linens while smiling the whole time.

Like many dogs in the canine foster system, Blanche had suffered severe trauma. She had been seized by the police from a home in Queens, New York, along with 55 cats, 12 dogs, and two turtles. After she left that home, she spent eight months at the ASPCA, partially because her location couldn’t be advertised lest it muddy a lawsuit involving her owner.

Physically, she was a mess. The shelter suspected that she had been kept indoors and bred for most of her life. She didn’t understand that she was supposed to go to the bathroom outside, her body was maladjusted to any temperature below 70 degrees, she had severe environmental allergies, and she was prone to skin and paw infections. Emotionally, she wasn’t much better. She was afraid of humans, she was fiercely aggressive toward other dogs, and she was quiet and disengaged around my apartment.

The behaviorist at the ASPCA (to whom I owe any sanity I retained during the foster process) had determined that Blanche’s foibles were a result of low dog self-esteem. Her aggression toward other dogs was heightened defensiveness, her slowness to begin to play was a reluctance to get attached or emote freely. I was told that Blanche needed to learn to bark indoors ― literally. She needed to feel that this was her home, that she wanted to protect it, and that her voice could be heard.

I had a lot of sympathy for Blanche. But I’d only had her for three days and she’d already managed to pee on my couch, throw up on the floor, and jump onto my kitchen table.

And Blanche wasn’t the only one who had been through a lot recently. The September that I got Blanche had been rough. My neighbor had died suddenly, my boss was fired, my roommate left our two-bedroom apartment, and my brother ― my only sibling ― moved out of the United States. So, by the time of the bed-peeing incident, I was ready to chalk dog-fostering up as a brief experiment that proved to be a bad idea in a series of unfortunate events.

No one in my life would have been surprised. I had never lived with a dog before. In fact, prior to welcoming Blanche into my home, I had never even liked dogs. Were it not for friends who were fostering a dog for the first time, an English bulldog from the same home as Blanche, the prospect of fostering a dog would never have occurred to me. But, as I got to know their pup while visiting their apartment, my heart softened. I imagined that I could create a loving, stable space in my home for a dog in need.

Upon calling the ASPCA, I was introduced to Blanche; I took her home hours after I first met her.

Now, I gave myself, and her, one week. After that, Blanche was going back to the shelter.

Until one night, when she threw her body against mine. I unfurled to find Blanche panting in front of me and grinning widely. I realized that she was initiating play with me on her own terms. I tossed the bone aside and threw her legs into the air, shoulder-butting her and growling in spite of myself. She responded by leaping, scratching, twisting her body to and fro.

To date, it was the weirdest play session I’ve ever participated in. It was also the most beautiful.

My ultimatum of one week bled into months. Somehow, the heavy exasperation of those first few days shifted to pure wonder. I began to feel something similar to what I imagine new parents must feel as I eagerly waited for her to hit other milestones in her rehabilitation: playing catch, then running outdoors, then tolerating my new roommate’s dog who moved in.

One day, Blanche jumped out of her bed and ran to the front door, letting out a deep bark. I had always found barking dogs immensely annoying; I’d had plenty of exposure to my mom’s and roommate’s yappy terriers. But this bark, the first of Blanche’s I’d heard, was different. It meant that, for the first time since I had gotten her, Blanche felt secure, affirmed, even proprietal. I silently cheered her on as she charged toward the door in a fury. By December, Blanche was barking nonstop.

After seven months, Blanche was ready for a permanent home. I had ample reasons for choosing not to adopt Blanche: the expense, the medical responsibility, the fact that my parents and friends all refused to dog-sit, as Blanche had already tried to attack each of their dogs, often more than once.

If I’m honest, though, there was another element to my decision not to adopt her: I wanted to continue to foster dogs. Blanche’s transition from traumatized to thriving was exhilarating; I yearned to witness that kind of hope-on-speed again.